Advance obedience is to a dog what putting down the toilet seat is to a man – it takes patient training but it can be done. Dog obedience training is one of the most rewarding experiences between a dog and his pet owner. You are not just doing yourself a favor; you are giving your animal a happier and fuller life. Obedient dogs are well-adjusted, self-assured and mentally quicker. You can be confident in his behavior even if you leave him alone with other people.

The most important thing to remember in attempting to train your dog is to establish your role as the superior in your relationship. When he understands that you are his master, it is easier to teach him the commands he is expected to obey. Confusing the animal in this regard can be dangerous; he will be aggressive and strive to dominate you. Don’t overcompensate and be excessively harsh to show you’re the boss; be firm, stand your ground and correct this unfavorable trait as soon as you see it rearing its ugly head.

Make your authority known by using a strong and sure voice. When you say “Sit!” gently guide him in the desired position firmly. Each command will take several tries, especially in the beginning. Progression from basic to more advance obedience training is relatively simpler once your dog recognizes the patterns you’ve set in your teaching sessions.

Operant Conditioning is rewarding your dog with treats or praise for correctly accomplishing the command. It is the single most effective way to train your dog; it’s what he understands. Praise your dog every time he does something right. Sometimes, this is easy to overlook but make the extra effort not to. Dogs get confused easily and recognizing good behavior every time will ensure that he remembers what is right.

Inversely, reprimand the animal whenever he makes a mistake.

Do it during the mistake and not after so the dog will understand the error of his ways. Scolding him will also highlight the difference between what is good from what is bad. For instance, if he starts finding the unidentified dirt on the street interesting enough to eat, reprimand him then and there. Then put dog food before him to eat. When he starts eating his own food, be lavish in your praise.

To be able to progress in dog obedience training, keep sessions short and as often as possible. Be repetitive in your commands. Don’t restrict teaching your dog during “school time” or certain hours of the day. Otherwise he won’t feel like studying during summer vacation, so to speak.

Movie dogs awe you with the complexity of the stunts asked of them. But they all started with sit. Begin with the basics and climb your way up. With patience and consistency your dog will advance to more difficult commands like growl, leave it, fetch and attack. Use the same principles in how you trained him earlier and you will find success in the higher levels.

Now that you’ve got a working knowledge of a professional trainer’s guide to advanced obedience training for dogs, it’s time to roll up your sleeves, get Fido and start training!

Melissa Simmonds has experienced the benefits of dog obedience training with her brood of dogs. Find out more about Advanced Obedience and how you can use this with your own dogs at her Pet-Care-Information.com site. 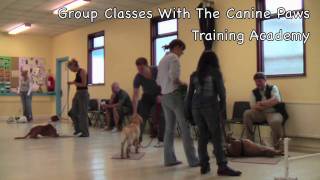 The Canine Paws Training Academy offers group training classes to help teach your dog basic obedience and manners. This is the third session of a series of 5…