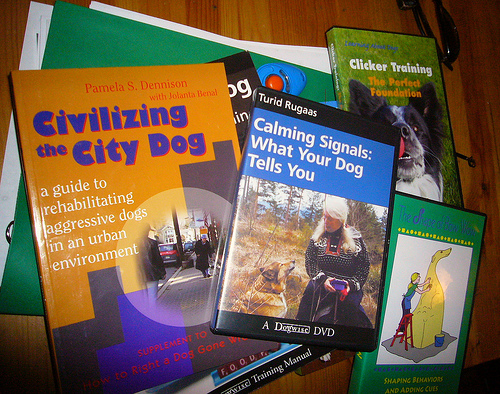 Image by lili.chin
borrowed from Sarah

Recent years have seen an increase in popularity of dog training and obedience.

This is largely due to the popularity of dog professionals as Cesar Milan , Ivan Balabanov, and Ian Dunbar

The training a dog for obedience goes back as far as 3000BC where dogs with what appears to be collars on their necks appear in paintings on the walls of ancient civilizations.

Many many years after these painting in 1910 a German Colonel by the name of Kongrad Most published “The Dog Training Manual” thus becoming the father of modern dog training. The methods described in The Dog Training Manual use correction and punishment quite heavily. Something that would pretty much be looked down on by positive trains. But despite its apparent cruelty it is still in use by some military training facilities.

Ironically his principals will later give rise to “clicker training”.

The idea of clicker training was first introduced by Marian and Keller Breland in 1943 who teach animals of different kind for televisions, shows and commercials.

Clicker training is basically a mechanical object that signals to the dog that the action it has performed was correct and a reward can be expected. It does that by you guessed it a sound of a “click.

” This “click” sound is more technically referred to as a “bridge word” among dog trainers and of course can be replaced by any sound or human voice. (For example YES.

) Another major change clicker training has bought to the world of dog training was the evolution of what is now commonly referred to as “positive only training”.

“Positive only training” refers to a method of training where the dog is given total freedom of choice in relation to performing the task given and gets rewarded by the use of treats.

This method of training has grown in popularity over the years and of course caused quite a bit of controversy between advocates of positive and the more traditional trainers of dogs.

Let’s take a quick look at the pros and cons of both methods.

Positive Training. Pros: It looks good as the dog is given freedom of choice.

Cons: It is unreliable as shown by the relative scarcity of positive only trainers at the high level of obedience trails.

Cons: As the dog is forced to perform the action it can develop side effects such as fear, shutting down, or in the worst cases aggression.

Of course when you are a new dog owner this can cause quite a dilemma do I want reliability or do I want a dog that is happy and not afraid of training? Well luckily there is a third method of training one that has been pioneered and developed by people such as Ivan Balabanov.

It is a mixture of both traditional and positive training methods. The idea behind this third approach is to develop a reward system and other key words such as YES and NO that lets the dog know when it is doing right or when it is doing wrong. The “game “is used to reward the dog.

This way the dog gets rewarded when a task is performed correctly (positive training) and punished when the action is performed incorrectly. (Traditional training.

) The major difference between the previous two training methods and this one is that by the use of key words a trainer can clearly communicate to the dog weather the action is correct or not.

This is somewhat similar to the old children’s game of HOT/COLD. Whereas an object is hidden and the player knows where it is by listening to other players saying Hot, Hotter.. or alternatively Cold Colder.

This way with small approximations and practice the dog trainer can create a happy environment for the dog to learn in as well as maintaining reliability.